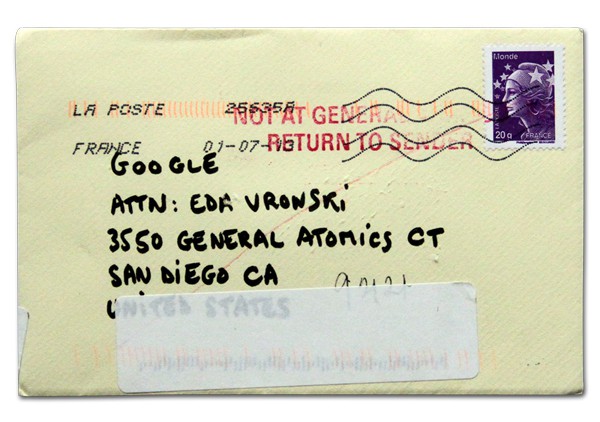 Since Magali Daniaux and Cédric Pigot met in 2001, their joint work bears the dual hallmark of experimentation and performance. Pieces bring together various media, associating elements from opposite ranges, with a taste for connections between Sci-Fi and documentary forms, high-tech engineering and fantasy tales, heavyweight materials and fleeting sensations. Read more

The artists tried to find the track of Eda Vronski and later on the track on Daniel Chong, both are coming from their fictions (See UV a collection of texts written by the artists and published by the Supernova Editions). The letters came back to them with writings on it, stickers, and stamps. According to the different addresses we can follow the artist’s preoccupations all over the years such as the climate, finance, alimentary resources management … Maybe the most symbolic, is the one that have been sent to the nuclear central Fukushima shortly after the catastrophe and sent back to the artists with a word of apology from the Japanese post office.

«We don’t have any news from you».