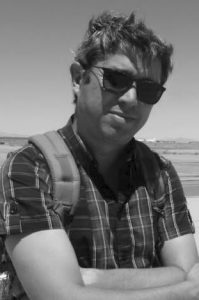 Ewen Chardronnet (1971) is an author, journalist, curator and artist from France. He has since the early 90s participated in many artistic endeavors (music, performances, films, fanzines, installations, residences, production, group exhibitions) and wrote as an essayist in numerous publications. He has lectured extensively and participated in numerous conferences. He has served on various boards and committees in the field of art and technology, and has worked as a consultant. He co-founded, with the collective Bureau d’études, The Laboratory Planet journal and write regularly on hacker/maker culture in Makery magazine. Active in the field of space culture since 1995, he led the 2001 book Quitter la Gravité, the French anthology of the Association of Autonomous Astronauts and received the 2003 Leonardo New Horizons Award for his contributions to initiatives Acoustic Space Lab and Makrolab. He participated in the artists in weightlessness MIR campaign, Microgravity Interdisciplinary Research, a parabolic flight at the Yuri Gagarin Cosmonaut Training Center in 2003 ; and in the first Air Zero-G private flight with the CNES in Bordeaux in 2013. He is a permanent member of the pilot committee of the Ksevt, the cultural center of European space Technologies (Vitanje, Slovenia). He recently released a book on the secret history of the american space program (Mojave Epiphanie, Inculte, april 2016) and its links with politics, arts, science-fiction, counter-culture and occultism in the years 1935-1955.Curatorial programs or exhibitions (selection) : Guest curator, cultural seasons « Étonnante Lettonie » in France and « French Spring » in Latvia 2005-2007 ; Artistic director, Futur en Seine 2009 (Île-de-France) ; Guest curator, « The rise of performance architecture », TodaysArt Festival 2011 (Nl, Be) ; Adviser at artistic direction Michelangelo Pistoletto, Evento 2011, Bordeaux ; Guest curator, « Sonores », Curators’ lab of ECC Guimarães 2012 ; Artistic director, Festival Accès(s) 2012 and 2013, Pau (Fr) ; Guest curator, « The Price of Bare Life », Rencontres Bandits-Mages 2014, Bourges ; Guest curator, ArtLabo residencies program, Ping, 2015 et 2016, Nantes ; Guest curator, Festival Gamerz 2016, Aix-en-Provence.

ABOUT HIS COLLECTION FOR ARTJAWS: “COSMOS OF MUTUAL EXCHANGES”

Throughout my journey as an author, journalist, curator and member of collectives, meeting artists has always been a chance for me to develop my knowledge and theory around speculative fields that go well beyond the fixed borders of academic reflection. As such, while curating exhibitions, art directing festivals, coordinating residencies and directing productions, I have always sought out a relationship between art practice and theory that, rather than merely being mutually beneficial, leads to a true exchange. I have always felt more enriched working with the artists, rather than simply writing about them. For me, an exhibition is not a final goal but a platform where each player enriches their sensory knowledge and collectively participates in opening up new ways of perceiving and acting in society, faced with our accelerated world. These are the mutual cosmic exchanges that give artworks their “value”… and can help us to rethink our politics of recombinatory commons. So I took the opportunity of this online curation to revisit a decade of collaborating with artists and to see where this new perspective on mutual exchange (with the gallery, the collector) can lead us. During these years, Slovenian artistic life has been a major source of inspiration for me, and this is expressed in the selection, which is faithful to the community spirit. You will see works by: duo Bureau d’études (France), with whom I have been collaborating intensely for the past 15 years; Magali Sanheira (France), with whom I worked on Guimarães Cultural Capital 2012 and more recently in parallel with my last publication Mojave Epiphanie (Inculte, 2016); Diego Movilla (Spain); Luce Moreau (France) and Fabric.ch (Switzerland), with whom I worked on Accès(s) Festival in Pau; Maja Smrekar (Slovenia), La Galerie du Cartable, Fabrice Cotinat et Marie Losier with whom I collaborated for Rencontres Bandits-Mages in Bourges; Sanjin Cosabic (France, Bosnia), whom I had the pleasure of meeting these past years and with whom I will collaborate for the first time; Robertina Šebjanič (Slovenia) and Špela Petrič (Slovenia), whom I invited for an ArtLabo residency at Roscoff Biological Station (France); Miha Turšič, Dragan Živadinov and Dunja Zupančič of the collective Postgravityart, with whom I have been collaborating for the past four years at the KSEVT Cultural Center of European Space Technologies in Slovenia and with whom I will work on this year’s Gamerz Festival in Aix-en-Provence, France.

THE ARTISTS OF “COSMOS OF MUTUAL EXCHANGES”

THE ARTWORKS OF “COSMOS OF MUTUAL EXCHANGES”