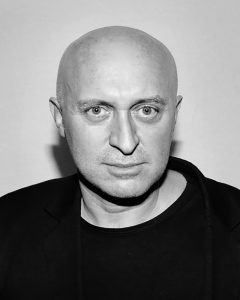 One of the initiators of www.synesthesie.com (the first French online art media in the 1990s), author and independent curator, Jean Jacques Gay is a researcher at CITU (Paragraphe Laboratory – University of Paris8). He directs solo exhibitions by Maurice Benayoun, Pierrick Sorin, Stéphane Trois Carrés, Samuel Bianchini, Valérie Mréjen (among others), as well as online exhibitions such as Spamm.fr and Spamm.arte.tv for Arte. As an art critic and member of AICA, JJ Gay contributes to several French media: Libération, France TV, Arte, Les Lettres Françaises, Muséart, and more recently MCD, l’Œil de Links (C+), Turbulences Vidéo, Artension and Art World Magazine (Shanghai). In 2007 he founded www.larevue.fr, a blog about points of view on art. JJ Gay is also a writer for television, museums and various institutions, and president of the Writing and Emerging Forms commission of SCAM. He organizes conferences and events related to technologies and images and gives lectures as a research professor at universities (Paris8, Annecy, Montpellier, Marnes la Vallée) and private schools (EESI, ENSBA, FRESNOY, ENSAD), where he has organized hybrid conferences featuring artists such as Steina and Woody Vasulka, Atau Tanaka, Milène Guermont, Ko Nakagima, Luc Courchesne and Fabrice Hyber.

ABOUT HIS COLLECTION FOR ARTJAWS : “ArTT” (Art To Tablet)
A collection of tablets by contemporary artists.

Contemporary art lovers cannot ignore new media art and its capacity for original collections and demonstrations. From video to Net art, interactive installations and animated GIFs, digital art is being exhibited on a new screen: the tablet. From Agam to Hockney, big names of the art world are using these nomadic screens as an organic and living canvas to share the adventure of their collector. As such, this long-awaited collection of multiple “tablet-artworks” accessible to all represents more than 30 years of art and art collections on mechanical media, both electronic and digital. Based on an idea by Jean Jacques Gay, the first multiples of the ArTT series produced by Art2M initiate a new way of collecting. Exhibited, manipulated, installed, hung and shared, these tablet artworks by Samuel Bianchini, Aurélien Bambagioni and Maurice Benayoun a.k.a. MoBen exploit interactivity, connectivity and all the features of the nomadic device that augment the artist’s vision of their collector’s daily life—contemplative, playful or simply curious to touch and participate in today’s art.

THE ARTISTS OF “ArTT”

THE ARTWORKS OF “ArTT“