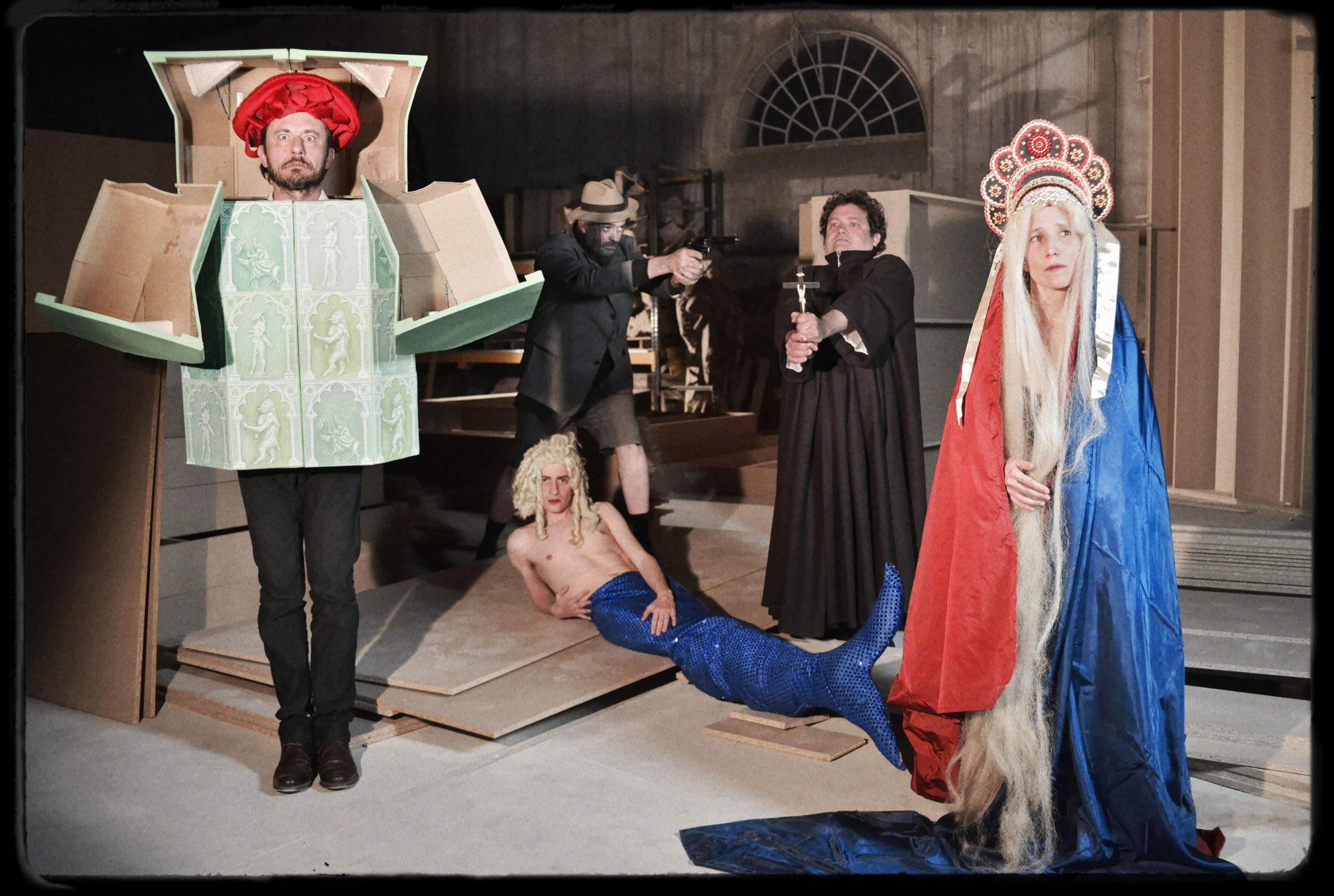 It is in 1990, at the Chateauroux ‘s Marcel Duchamp middle school , an experimental art school of collective creation that Fabrice Cotinat, David Legrand and Henrique Martins-Duarte met and started working together. But it was from 1999 that they decided to fully engage in a common work by creating the gallery : a portable audio-visual structure in which, alternately director, actor and writer, they invest the audiovisual creation through the “Video-schoolbag” – a space of projection and nomadic creation – and then practicing an invention of cinema whose originality is based on low-tech device shootings and strained stagings by cobbled architectures. Since they identify their practice by this signature and they place their work between the creation of situations, interventions and performative films implantations. From 1999 to 2003 , the offered prospects by the “Video-schoolbag” lead to show and transmit the video image in real time other than how the television invests it :as free media studies and filming researches in the use of a small group that is considering an experimental daily life. This is how, for example, at a time they seek another path that exposure and while they test and carry their mobile movies on the streets, bars, squares, gardens, churches, cathedrals, nightclubs, museums, art centers, people, they met another “wearing man”: Boris Lehman. With him, they realize in 2003 the 16mm manifesto about the way of wearing lightweight film, a film proposal to carry the heaviset film of Belgian cinema. Gradually, while exposing their filming activity by transforming the exhibition space into a movie set, they give up exposure for the filming space. “The film became our only venue.” The series of “fictive dialogues” , a fiction produced by the gallery since 2004, inspired by the ” Dialogues of the Dead ” by Fenelon, features conversations between members of the Galerie du Cartable with nowadays artists ( Michel Aubry, Boris Lehman, Michel Giroud, Francoise Quardon, Joseph Morder, Alain Cavalier) through historical or imaginary personalities (Dürer, Beuys, Le Corbusier, Pasolini, Warhol, Filiou, Elvis Presley,Marie-Madeleine, Roland Barthes, Marguerite Duras, Kokoschka and Günter Brus). These films from collaborations generate much life through the voices of famous dead by verbal collisions, or formal and visual, aesthetic reflection intrinsically constitutive of the human being, what is it in the world , sensory experience in which are organized and ordered the representations and symbolic projections, individual and collective. What are the relations between matter and spirit, technology and culture, technology and art? Meanwhile between 2007 and 2010, during several stays in Laos, a last of 4 months, in collaboration with Isabelle Carlier (videographer, editor, programmer and director of Bandits-Mages) they lead the construction and activation of a bamboo made multimedia studio called “solar studio” at the school of Fine Arts in Luang Prabang, a place for new self-making practices and digital crafts for a research program and filming creation linking the modes of transmission and Lao representations to the common technologies. With the creation in 2007 of Châteauroux Underground, a 1901 law association for the promotion of a collective art, members of the gallery develop multiple projects occupying the fields of film, video and new media mutation. They combine on filming or media stage what they call: the Movie video, the Robotic-Art, the Plastik filming, the “numerethic” , the performative or experimental television.