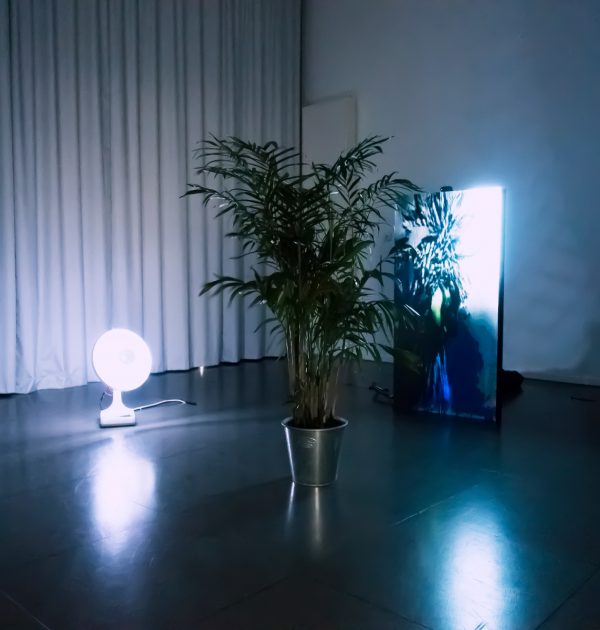 Lukas Trunigeris an artist and musician. He engages in the areas of multimedia installations, sculptural objects, performances and the creation of new musical instruments. He is fascinated by complex systems and hidden processes in nature as well as in society. For their exploration, industrial materials, hacked devices and misused tools have become crucial to his creation. His work establishes singular experiences challenging our modalities of perception. Read more

The installation questions the beauty and brutality of the interconnections present in nature. Inspired by various symbioses and parasitisms, in which imitation and mimicry play a crucial role, a micro-environment of two objects and a living being has been set up. It consists of a tropical plant, a modified fan and a low resolution LED screen. Thanks to a camera and an intelligent algorithm, images imitating the plant are produced on the screen. A perpetual learning process enables this adaptation to reality. At the same time, the light from the screen helps the plant to survive. The modified fan acts as a source of wind; a form of natural chaos. The three entities form an ensemble, richer and more powerful than the sum of their individualities. It is an environment capable of generating surprising behavior, produced by the exchange between dead actors (the screen and the fan) and a living actor (the plant).

Produced by Le Cube – Centre for digital creation and Bipolar.
With the support of the Cité Internationale des arts, Paris.