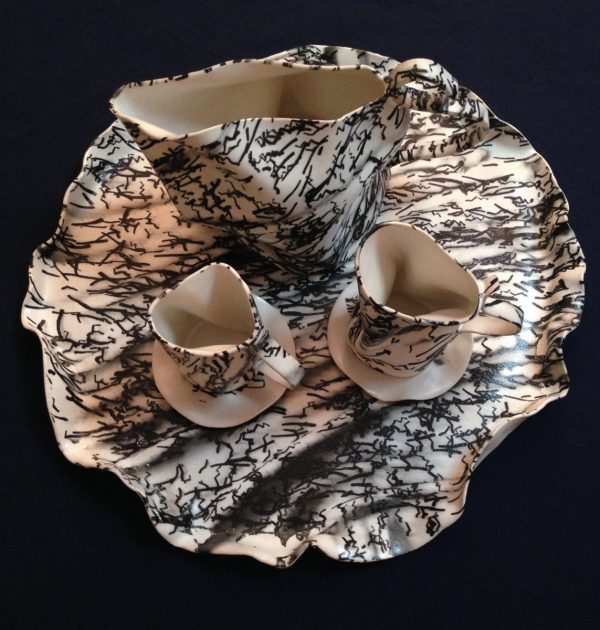 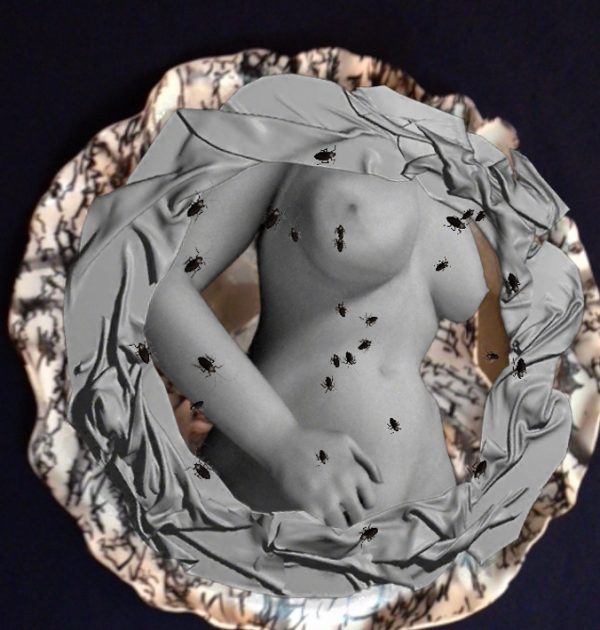 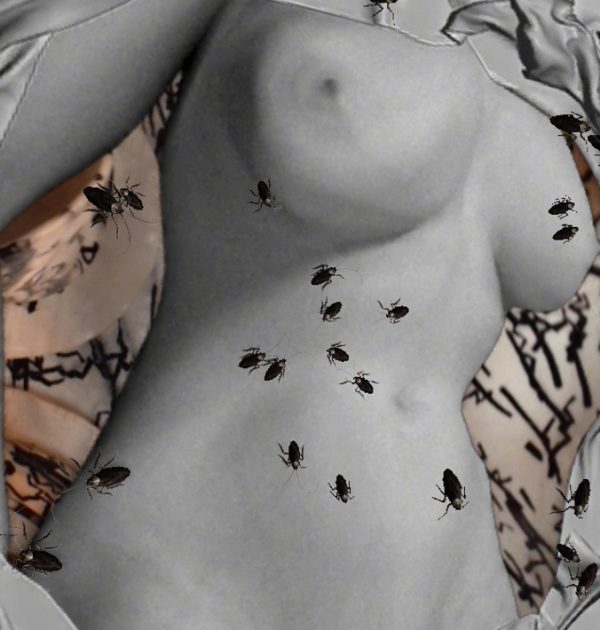 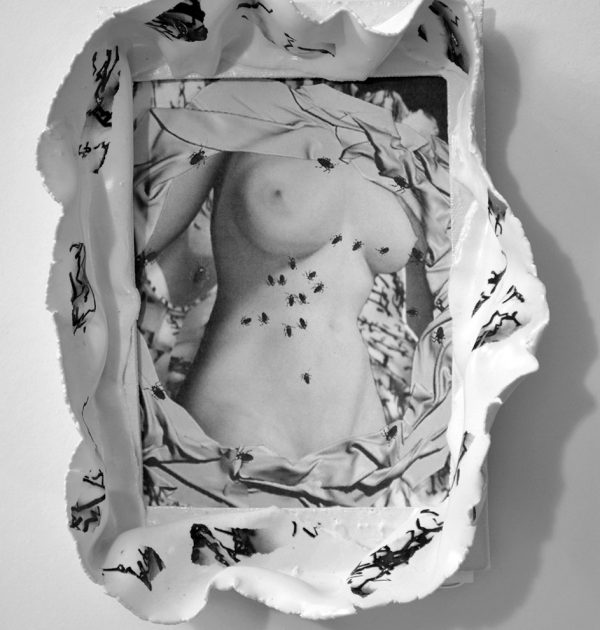 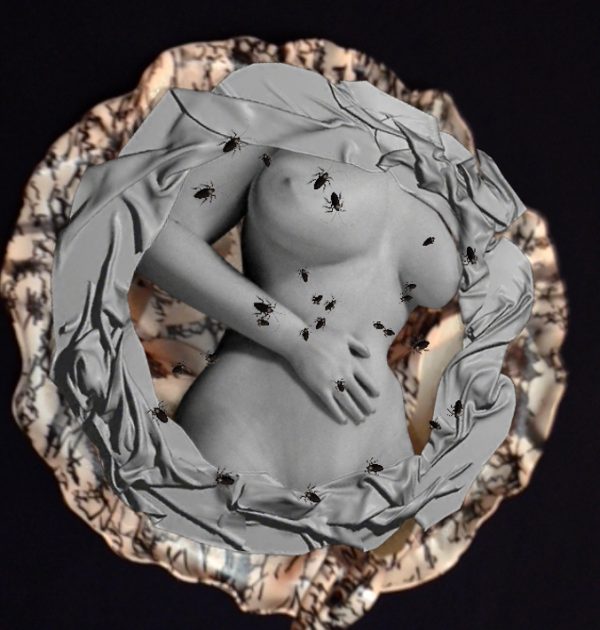 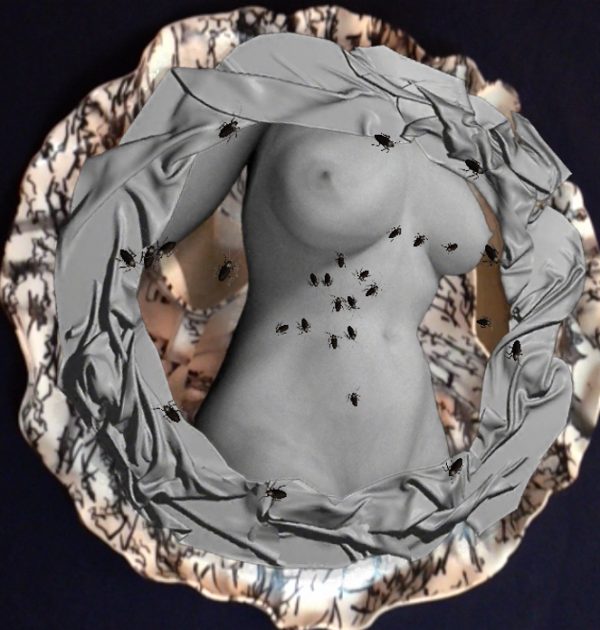 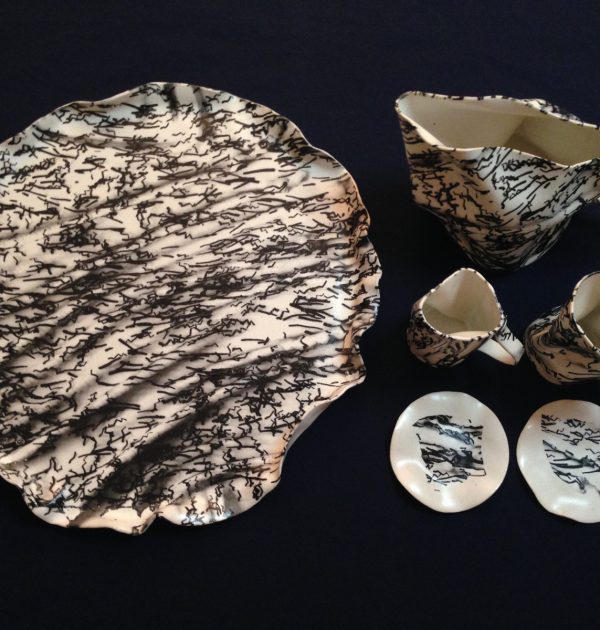 Alice Tea Set is a porcelain tea set on which one can view a naked sleeping odalisque, through a smart device by using custom augmented-reality software. This sleeping figure tosses and turns, apparently lying across one’s meal. Artificially intelligent insects crawl in endlessly mutating patterns over both the illusory figure and your solid, “reality” food. The technology behind the Alice Tea Set is a special augmented-reality app, designed by the artist, created to accompany the miniature tea sets, hand-thrown by Kimi Kim. Once launched and the camera of your device is directed towards the plate, the app recognizes a decorative pattern inscribed on the porcelain, to display a custom-authored video projection that seems to be a part of your meal. Alice Tea Set imagery is enigmatic and dream-like, adopting the cinematic style of early twentieth-century Surrealist photography and experimental film. The inspiration for Alice Tea Set was Chien Andalou, the 1929 film by Luis Bunuel and Meshes of the Afternoon, the 1943 experimental film by Maya Deren. Hart’s approach to the custom app is to locate it within the media histories of avant-garde photography, film and video just as experimental artists have always worked with new technologies from their initiation, beginning with the development of photography in the late nineteenth century. With the Alice Tea Set, The artist draws on the visual style and psychological subject matter of early technologies, from those you see in early Surrealist photography and film, as well as those found in even more media “archeological” technologies such as the peep-hole camera and the Zoetrope. With the Alice Tea Set porcelain dish, an erotic transgressive layer of imagery floats in an illusory space across your supper. And just as our dreams arise from the unconscious, augmented projections manifest in an illusory liminal space… the puerile truth behind the sophisticated bourgeois world of interior decoration and design.