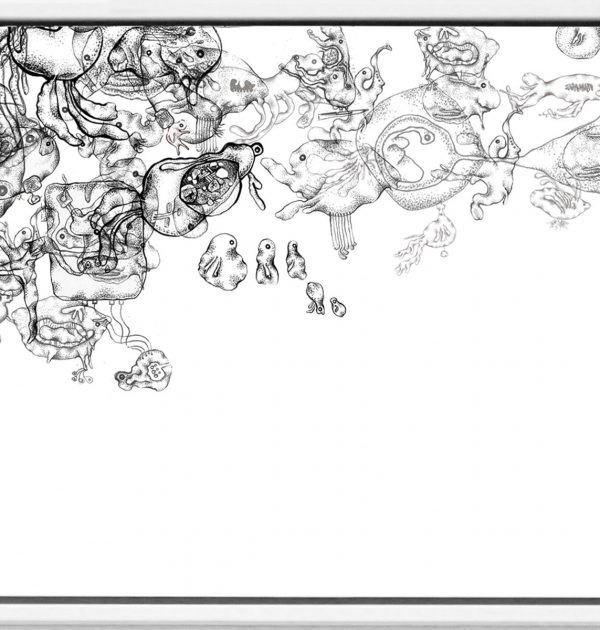 Dream of other worlds #70

Golnaz Behrouznia has always been interested in the natural sciences, in the observation of microscopic life and in life in all its dimensions. Today it is with her artistic vision that she reconnects with her passion for the living. The media she chooses, sculpture, video installation, and drawing, support her idea to create a hybrid world, bringing the biological together with visual art. Read more

Since 2011, Golnaz Behrouznia has been drawing her “Imaginary Encyclopedia”. This work is a repertory of forms oscillating between scientific concepts and artistic research, creating a dialectic that refers to both science and biology, while being exclusively self-referential.

“My artistic process consists of posing questions about various aspects of life through different representations of imaginary characters—creatures that resemble physical models such as micro-organisms and which reference the biological world. I tried to regroup and classify these creatures into a sort of imaginary encyclopedia. I compose the forms in relation to each other, imagining the next generation of forms resulting from crossing them with the previous generation. A sort of logical structure emerges from this creative process. I start by examining all my sources of inspiration and their characteristics, in order to glean information. This starting process leads me to unreal specimens, albeit rooted in reality, which develop a potential opening into artistic and scientific questions.”

Serie « Dream of other worlds »

In her drawings, Golnaz Behrouznia imagines and defines the form of each character by considering the different levels of living creatures and their interdependencies. She then makes video animations from which she creates her installations. For her “Dream of other worlds” series, the artist took renewed inspiration from her video animations to create this spirit of a fictitious ecosystem, united/plural body, in graphical compositions using mixed techniques.