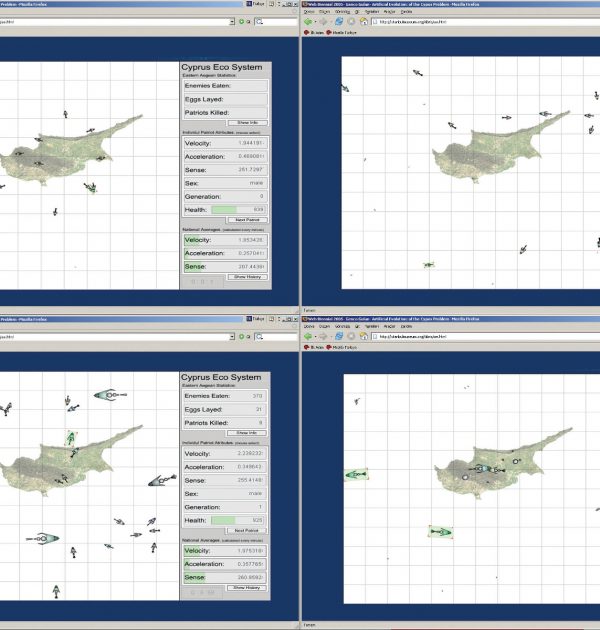 Artificial Evolution of the Cyprus Problem

Genco Gulan is a multimedia contemporary conceptual artist, who defines his practice in painting, sculpture, performance, video and new media as “idea art’. Gulan was born in Istanbul in 1969. He got his first prize from BP in 1993, got New School scholarship in 2000, took part in the team that won EMAF 2005, selected as a finalist for Sovereign European Art 2011 and awarded Master Artist at Ege Art in 2015. His works are presented in museums such as the Centre Pompidou in Paris, the Pera Museum, the ZKM, the MAM in Rio de Janeiro, La Triennale di Milano, the Ankara Resim Heykel Museum and the CerModern. Read more

The little island of Cyprus is a lair where organisms initially spawn, male and female. There organisms or Patriots need to eat each other, otherwise their energy drops until it reaches zero and they die. If they eat a lot and their energy reaches 2000, the go to the lair to find a Patriot of the opposite sex to reproduce. Because of their simplified DNA, the organisms’ survival capabilities depend on three main attributes: their cruise or swimming velocity, their acceleration and their perception of the surrounding environment and their eyesight radius. Each time the simulation runs, the initial DNAs are loaded randomly, and each time two Patriots reproduce, their offspring carries an average of their DNA plus small random genetic variation. The competition for more opportunities is dramatic. The better Patriot outlasts the worse and hence they pass out their genes. This is the simple evolution of the Cyprus Problem!

The simulation provides information about the current Patriots population status at the right side of the Eastern Aegean Sea. The top box shows overall statistics. The middle one shows individual Patriot DNA or attributes. The focused Patriot can be selected by pressing the “Next Patriot” button until it’s reached, or simply by rolling the mouse over the Patriot in the sea. The bottom box shows DNA averages of the entire current population. These averages are stored in a history graph, which can be accessed through the “show history” button.

*Note: The simulation is intended to show interesting results when ran for a few hours. Results are always different and pretty hard to interpret objectively. If you wish, you may alter the food parameters within the DNA but be careful: slight changes in the food grow rate, food max amount and food reward cause dramatic effects on the evolution.