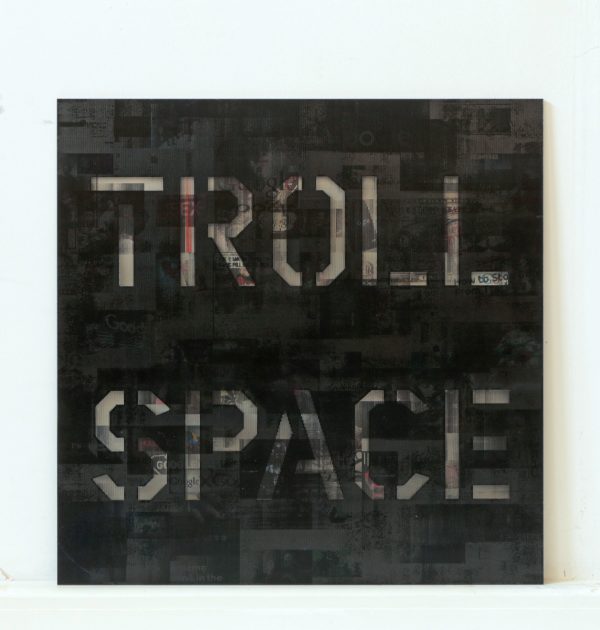 Pascal Dombis (born in 1965, lives and works in Paris) is a visual artist working with excessive technological processes. Through the production of excessive repetitions of simple processes, the artist creates unpredictable, unstable and dynamic visual environments, and explores such fields as language, noise, control, irrationality and every other aspect of our contemporary digital-driven societies. Read more

Meta-Google confronts William Burroughs’ heritage with Google, the symbol company of today’s soft global digital capitalism, in order to question our relationship with pictorial digital proliferation. William Burroughs is surely one of the most influential artists of the 20th century. His experimental writings and his use of the random factor as a creative process have inspired me for many years. And especially the famous Cut-Up technique developed by artist Brion Gysin and Burroughs in the 1960’s Paris. By destructuring texts in a random non-linear way, Cut-Up allows creating a new language which is for me a very close match for today’s digital and technological universes. William Burroughs was fascinated by control strategies and the human language. He believed that language was a parasite, a virus from outer space. According to him, written words came before spoken words “I advance the theory that in the electronic revolution a virus is a very small unit of word and image.”, which led Burroughs to write many texts on the control system of written languages and their relationship with images. Out of them, I have selected a few sentences and aphorisms which I aim to insert in my new work:

“Image is Time, Time is Junk.
Words are still the principal instruments of control.
What is word?—Image is trapped in word—Do you need words?
The scanning pattern we accept as reality has been imposed by the controlling power on this planet oriented towards total control.”

When the Internet became mainstream in the 1990’s, we all saw it as a powerful opportunity to change the world. However, as revealed by Edgar Snowden, the Internet also turned out to be the infrastructure of a mass surveillance system where everyone is being watched and observed. And that changed the way we are now seeing the internet culture: from a utopian vision capable of changing the world to a Burroughsian-like control system. The Google company (now a.k.a Alphabet …) with the ubiquitous presence of its search engine and its implication in so many future developments crystallised this growing scepticism toward a digital future that is raising more and more concerns. Among these concerns, lie Artificial Intelligence and Cybernetic Consciousness and their inherent questioning of life and death. To address such cryptic issues, I’ve been using Google Search in my creative process because it is the most accessible visual embodiment of how Algorithms, Big Data and Artificial Intelligence are affecting/impacting our lives today. For many years I have been collecting images from Google Image Search, by googling “Google” in the major languages and on a routine monthly basis, leading to an accumulative data of hundreds of thousands of images. What interests me in this collection process is how these thousands of images relate to each other, and the meta-picture or the meta-story they are telling us. To what extent they are representative of the internet image flow and how they address issues related to the control mechanism in our readings of them. This Google “Google” collection activity started as a critical and ironic quest (the “sprinkled sprinkler” story…) but it turns out that I have been attracted by what I found: the outcome images relate to two different and opposite themes. As expected, many images present Google marketing materials (logo, products, company events …) and Google’s wide range of activities for our future: AI, Virtual Reality, Biotech. But a similar set of images relates to anti-Google images from all kind of jokes or activism against global surveillance (“stop NSA”, “pro-Snowden”), against digital capitalism (“Occupy”) and against the Internet itself (“off the grid”). Recently, I also noticed that more and more Google “Google” images are linked to “vision” and the human eye: Google glass, VR helmet. And with Google Art Project and the digitalization of all the artistic masterpieces kept in museums, Google is offering detail images of classical paintings and especially zoom on the portrait’s eye like the Mona Lisa’s eye…Lenticular is one of my favourite materials because it allows me to stack a large number of images and to produce a surface full of unexpected visual effects. By employing much more images than necessary, I maximise the conditions for visual accidents and create room for fuzziness, tremor or chance that I like to confront with the cold and almost-too-perfect digital process. The material allows me also to play with the viewer’s gaze. Depending on her/his position, the visual experience is never the same. Reading digital images becomes quite different from the conventional retinal vision of images. Images are circulating, they are continuously flowing. And the viewer’s gaze becomes also more and more dynamic, there is no longer a distance from the images, we are immersed into them and we fall in the digital images. For me, the lenticular material also questions this new paradigm on the reading images by bringing a physical and time-related experience, where the viewer needs to move in order to see. From the hundreds of thousands of Google “Google” images collected, a random selection is printed on lenticular and then stuck onto a black metal sheet. For me, this black assembling is a kind of iconoclastic gesture: the black background tends to erase all the images and transform them into a large monochromatic black picture. But there are still some traces, some shadows, some ghost images, visible through the transparency left by the empty cut space from Burroughs’ text or from the side angles and the outside light reflections. And these ghost shadows reveal a kind of negative intensity, saying that something is about to disappear. The whole paradigm of our relationship with images has changed. The Internet generates a profusion of images in which there is nothing to see. In this Meta-Google work, I try to question this situation. These pieces are talking about the disappearance of images through their circulation and proliferation. And they echo somehow to the development of Artificial Intelligence or Bio Technology where the ultimate goal is the death of death and the potential disappearance of humans as a biological only species. This Meta-Google series tends to create a mirror-image of its own disappearance, a meta-image that conveys the feeling that behind each image there is something that is about to disappear. Hence, an echo to Burroughs’ iconoclasm: Rub out the word, word begets image, image is Virus.