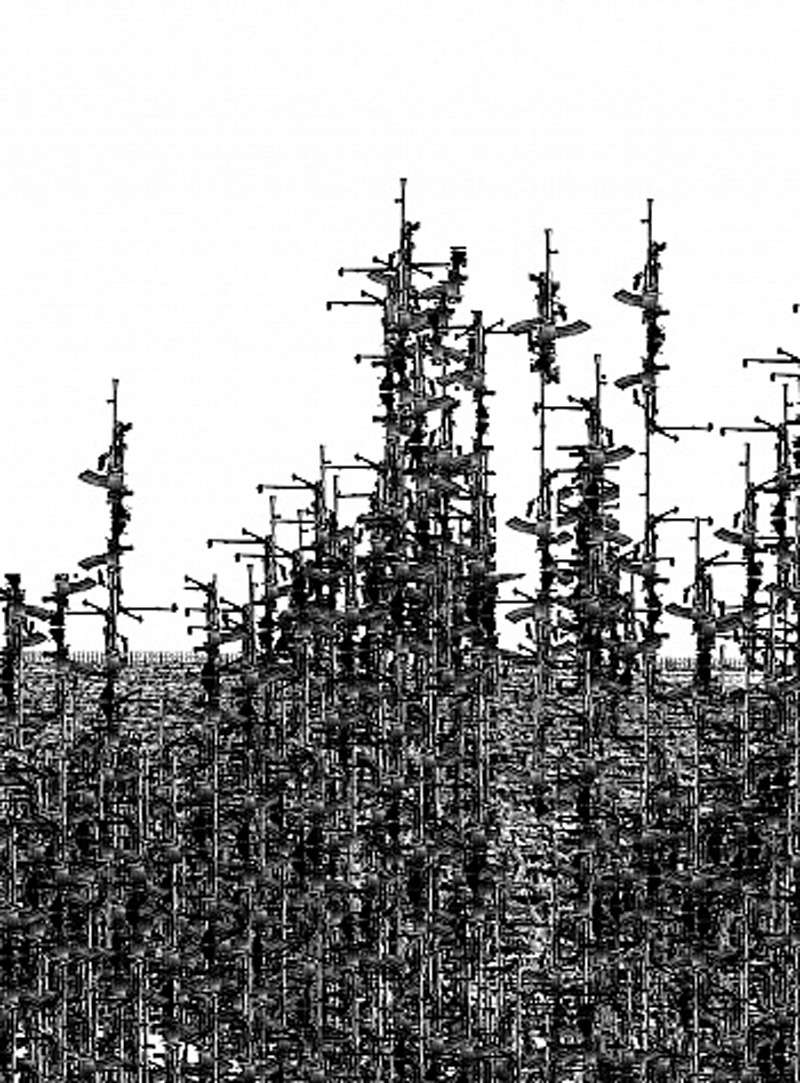 Lisa Sartorio belongs to that group of artists whose approach to photography consists of taking a critical look at the massive presence of images and their absolute availability in today’s visual culture. The internet, social networks and video surveillance are participants in the new creative processes and bear witness to the way in which the image is being transformed. Lisa Sartorio seizes this opportunity and creates visual experiences that disturb the relationship between the image and its pervasive presence, probing the visibility of the real and what develops both as it emerges and disappears. In her most recent work, Sartorio focuses on the concept of documentary evidence with series based on the disorder present in contemporary society. Here, repetition and duplication are considered to be the underlying premise of our mass culture, and the surface becomes the space for a new one-dimensional topology. (François Lozet, 2015)

Lisa Sartorio, Italian-born, graduated from the beaux-arts in Paris in 1993 and attended the Institut des hautes études en arts plastiques de la Ville de Paris (Institute of advanced studies in fine arts of the City of Paris) in 1994. Trained in sculpture, her work evolved to performance and visual arts. She received various prizes and scholarships including Aide à la création Ville de Paris (City of Paris aid for creation), Bourse d’étude Corée du Sud (South Korea scholarship), Artiste en résidence Valence Art 3 (Art 3 Artist in residence – Valencia), Winchester scholarship, Prix de la Fondation de l’Ensba Paris (Ensba Paris Foundation Award) and was in territorial residence subsidised by the Ministry of Culture with among others the Mac/Val at Vitry. Her personal exhibitions in museums and art centres include: Kunsthaus in Nuremberg, Museum of fine arts in Valencia, Maison d’art contemporain Chailloux (House of contemporary art in Chailloux), Palais de Chaillot, Musée d’Art Moderne/Palais de Tokyo (Museum of Modern Art/Palais de Tokyo), 19 CRAC de Montbéliard. Attached to the national scene of Cavaillon from 2002 to 2008, she taught image construction and semiotics at the Greta from 2007 to 2010. In 2010, she took part in the Nuit Blanche Parisienne (Paris all-night event) and collaborated on an artistic project with Arte in 2011. Her work was also presented at the FIAC, Slick Art fair and Art Paris. Her works are in many public and private collections: Musée des Beaux-arts de Valence, Musée des Beaux-arts de Paris, Arthothèque de Lyon, BNF, Collection Marcel Burg (Strasbourg), Collection Jacques et Evelyne Deret (Paris), Collection Laurent Savard (Lausanne). By 2015, she presented the monographic exhibition “Il était (X) fois” at the Galerie Binôme and took part in the collective exhibition “Créer c’est résister” (Creating means resisting) at the Lyon library in the framework of Résonance, Lyon Biennale 2015, accompanied by a conference led by Michel Poivert. In 2016, she participated in the collective exhibition “À dessein” with her series Dessin d’un tirage presented at Art Paris Art Fair and Galerie Binôme. She recently held a conference on her work at the European Photography House programmed by Gens D’images and Sophie Bernard.