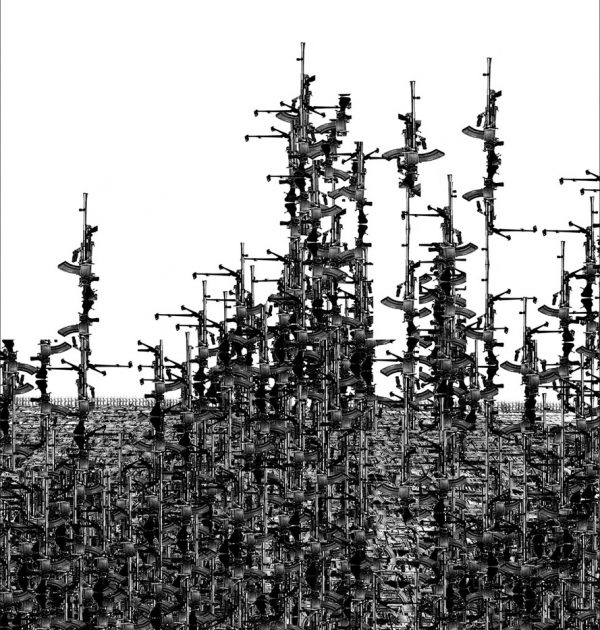 The writing of history, Bren–Mk1

The BREN is a British machine gun who has been in service since 1937 in the British Army. The BREN experienced the Indo-China War and then took part in the Korean War, the Falklands War or the Gulf War. For a number of years, Lisa Sartorio has put her camera aside. Because of the overabundance of images, she has decided to create some recycling processes. Her work questions the paradox surrounding the hyper-reproducibility of images that makes one forget the content and the meaning of what we see. The series The Writing of History is produced from photographs of war weapons from the Internet that have played a major role in world conflicts. The obsessive multiplication of each of these arms gives shape to simulated landscapes. Attractive from a distance, more closely they reflect the vertiginous scale of invasions and the shock of the state of decay of landscapes ravaged by war. Far from focusing on a feudal vision of the land and its relationship with the powers that be, The Writing of History is about compositions that take shape from within, in the relationship that each firearm module builds with its replica. Living shapes that are displayed exponentially and paradoxically, depicting creative energy and deceptive infiltration, sculpt physical and mental contamination. They represent the absurdity of a world contemplating its self-destruction. By using pre-existing images shared by everyone as a basis for creation, Lisa Sartorio falls within the movement of appropriation and shakes up our passive gaze by creating ambiguity regarding genre. Like M14-EBR, from the wheat field to the battlefield, she swings between photography and drawing, contemplated and documented landscape. These hybrid images highlight their power of suggestion. They represent our presence in the world more than the conflicts in a process that re-awakens minds.