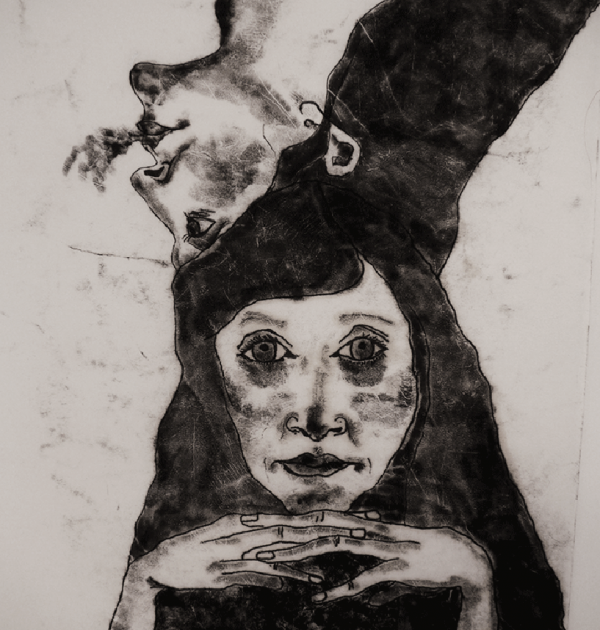 «I am a filmmaker and I have been making film portraits on 16mm film for a long time, in New York City, where I lived for 22 years. Portraits of artists, musicians, filmmakers, and friends, often all coming from an experimental environment, always on the edge of life and art (Genesis P-Orridge, Tony Conrad, Richard Foreman, The Kuchar Brothers, Alan Vega, Luchadoras sisters…). I spend a very long time, sometimes years with each of them to film their process of art making; our intimacy becomes the center of my films. I work alone with my camera, my microphone and a lot of whimsy. Through the years I found that the portraits became an extension of my autodidactic filmmaking. I depict those in my close circle, artists and friends with whom I find pleasure and intimacy in making monotypes. This technique is immediate, filled with element of mistakes, surprises, and are “negatives” of what I see and paint, just like celluloid film. These works are coming from the same place as the emotional relationship I have with the subjects. They are done in 20 minutes from life, the friend in front of me, after a nice tea and conversation. I ask each to bring an object that is part of their life and practice. Here April March, a singer-songwriter who sings in English and French. She is widely known for the song “Chick Habit”, which was featured in the films But I’m a Cheerleader and Quentin Tarantino’s Death Proof. She is also a cartoon animator, including a stint as a principal animator for the Ren and Stimpy show. Elinor by her real name is a very close friend who lived with me in NYC for a decade and played in many of my films. Elinor is a very mysterious and complicated and hilarious person and her voice and writing is her instrument. So i decided to paint her twice, upside down as a way to play with both of the side of her soul.»