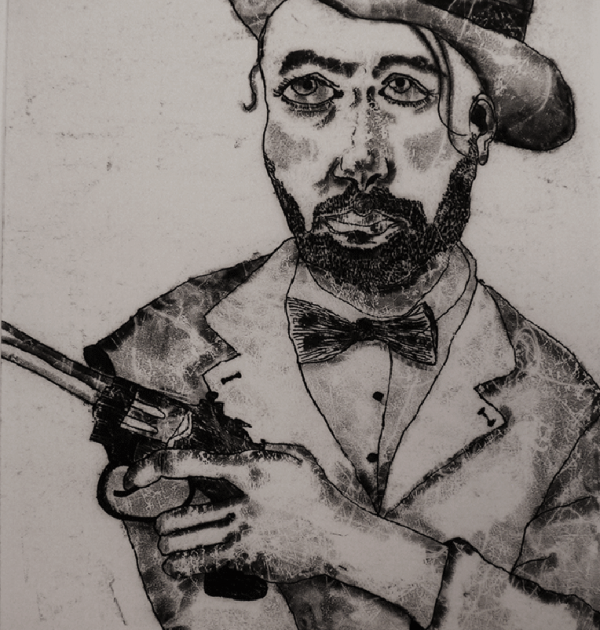 «I am a filmmaker and I have been making film portraits on 16mm film for a long time, in New York City, where I lived for 22 years. Portraits of artists, musicians, filmmakers, and friends, often all coming from an experimental environment, always on the edge of life and art (Genesis P-Orridge, Tony Conrad, Richard Foreman, The Kuchar Brothers, Alan Vega, Luchadoras sisters…). I spend a very long time, sometimes years with each of them to film their process of art making; our intimacy becomes the center of my films. I work alone with my camera, my microphone and a lot of whimsy. Through the years I found that the portraits became an extension of my autodidactic filmmaking. I depict those in my close circle, artists and friends with whom I find pleasure and intimacy in making monotypes. This technique is immediate, filled with element of mistakes, surprises, and are “negatives” of what I see and paint, just like celluloid film. These works are coming from the same place as the emotional relationship I have with the subjects. They are done in 20 minutes from life, the friend in front of me, after a nice tea and conversation. I ask each to bring an object that is part of their life and practice. Here David Legrand, a wonderful filmmaker, actor and inventor, a dear friend with many faces, very tall, incredibly imposing yet with dolls eyes and the aura of another century. David, always making films, costuming, playing with cinema is playing with himself again. Here he is wearing the costume and props a gun while rehearsing for the opening performance at the Triennial of Vendome.»