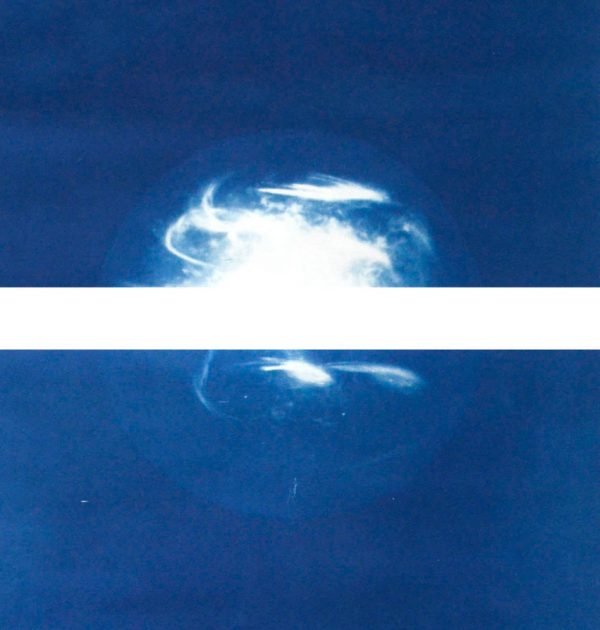 Fabien Léaustic, born in 1985, is an artist who graduated from both an engineering school and the national school of decorative arts in Paris. Informed by science, mathematics, mechanics, thermodynamics, Léaustic’s (re)conversion work leads him on artistic roads… roads which have been crossing and observing each other for centuries, if not forever. Read more

The cyanotypes Artémia, 2014, are the products of a machine, they are in some way “machined” or “engineered” images, “modelled” to reveal an unprecedented landscape, that of the establishment of the cycle of life with the beginning of the food chain. The light traces its own paths in the depths of the water and creates a turbulent flow of atoms; The “artemias” dance the first choreography of life in a ballet movement where fluids flow, fuse and disperse in multiple flows, volutes and whirls. The spirals open up everything that goes around and confers it a circulation, a direction and a sense. These cyanotypes are images of the origin, of the moment when something begins to appear in disorder and chaos, and this is undoubtedly the reason for our wonderment: we see in it the emergence of order and the revelation of the sense of things, how “it flows from source”. This is a “meta-phoric” art that brings us into “magnetic fields” of great turbulence to put us in front of a movement of creation, of morphogenesis, where everything begins and takes place, where vague eddies become a vital movement, where the wandering race becomes an orbit. The place where things start, but where they could also never have started. With this questioning of time and space, the scale of perception and the shaking of sensibility, it is the space thus defined and uncertain which enters into us, giving us the feeling that we are “immense within ourselves”, that we are still worked by the rhythm of these movements which organise the universe … that a tiny disturbance in the path of light would suffice for the creation of another world.