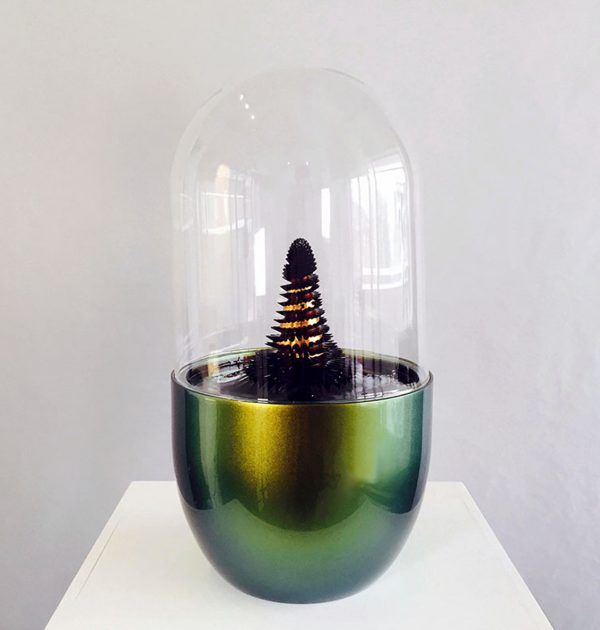 Morpho Tower (Pearl Green Blue) is the 2015 edition in her “Morpho Tower” series (Sachiko Kodama’s first realization of her “ferrofluid sculpture“). The color of the magnetic vase is dark red.  A gold spiral tower standing in the black ferrofluid. When the magnetic field around the tower is strengthened, spikes of ferrofluid are generated at the bottom plate and they gradually move upward, trembling and rotating around the edge of the spiral. The movement of the spikes in the fluid is controlled on the surface by adjusting the power of the electromagnet using a computer program. The shape of the iron body is designed to be helical so that the fluid can migrate to the top of the helical tower when the magnetic field is sufficiently strong. The artist’s creations are formed by a magnetic, oily liquid known as “ferrofluid,” flowing around a housing device and manipulated by a series of electromagnets located within the structure. The electrical charges create seemingly endless series of patterns that present themselves in an ebb and flow of spikes. The spikes emerge, rotate, change directions, grow, and disintegrate.